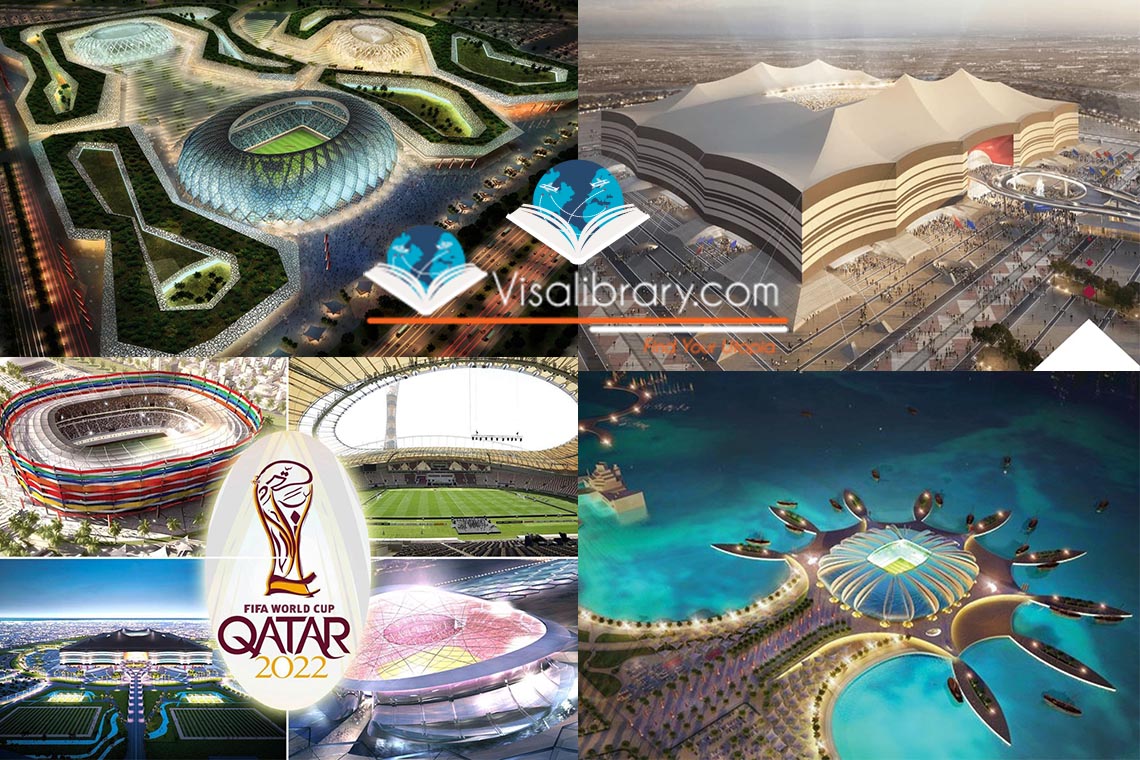 The FIFA World Cup is the second most popular sporting event in the world after the Olympics. Qatar will be the host of this tournament in 2022 as the first country from the Middle East that has ever held the FIFA world cup.

Qatar was officially announced as the host of the 2022 FIFA World Cup on December 2, 2010. Since that day, Qatar has made plenty of effort to make this world cup count. The Qatari government has invested hundreds of billions in their projects since their election. They have summoned stadiums from dust, made cities emerge out of nothing, and they have grown thousands of acres of grass and trees in the desert sand and built into the proposal.

This article will look at the Qatar 2022 world cup, its schedule, stadiums, and other subjects related to the upcoming FIFA world cup.

During his time as FIFA president, Sepp Blatter stood by the decision and endorsed the idea of holding a World Cup in the Arab world. In April 2010, Blatter said: “The Arabic world deserves a World Cup. They have 22 countries and have not had an opportunity to organize the tournament”. Blatter was also confident in Qatar’s progress because of their past accomplishment in the 2006 Asian Games and said: “When I was first in Qatar, there were 400,000 people here, and now there are 1.6 million. So in terms of infrastructure, when you are able to organize the Asian Games with more than 30 events, then that is not in question”. This is needless to say that Qatar received automatic qualification to the next world cup as host.

The next World Cup is set to take place in Qatar in 2022. This world cup is different because it is going to be held in the usual summer months. However, this tournament is set to happen in the winter months due to the heat.

What are the World Cup Format and Schedule?

The Qatar 2022 world cup will be one of the most compact tournaments ever because soccer fans can watch one or two live matches every day. There are 32 national teams playing in 8 stadiums, and these teams will play against one another for a total of 65 soccer matches.

These national teams will be divided into eight groups of four. At the group stage, which will last 12 days, four matches will be played each day, and the winners and runners-up will advance to the round of 16. In order to accommodate television audiences in different countries as well as supporters in Qatar, matches will only be assigned to particular venues after the finals draw. A draw for the finals will take place in April 2022, following the international fixture window in March.

Qatar has done wonders with its stadiums. There is less than an hour’s travel time between all the stadiums in Qatar. Fans can travel between stadiums via metro, car, rail, and bike.

Located in Lusail city, it is the largest stadium in Qatar, with 80,000 seats. It is currently under construction and will become open on November 22, 2021.

This stadium is constructed in Al Khor city with a 60,000-seat capacity. It is the second-largest stadium in Qatar and was opened on February 11, 2020.

This stadium will have five group matches (including the opening match), one round of 16 matches, one quarter-final match, and one semi-final match.

This stadium is in Al Wakrah city. It was opened on May 16, 2019, with 40,000 seats for capacity. This stadium will hold five group matches and one round of 16 matches.

Located in Al Rayyan, it is a stadium in Qatar with 40,000 seats. It was opened in November 2020. This stadium will feature five group matches and one round of 16 matches.

Education City Stadium is in Doha. It was opened in February 2020. It has a capacity of 40,000 people. This stadium will hold five group matches, one round of 16 matches, and one quarter-final match.

This stadium is located in Ras Abu Aboud. It was opened in 2021. It has a 40,000-seat capacity. This stadium will have five group matches and one round of 16 matches.

Located in Doha, it is a stadium in Qatar with 40,000 seats. It was opened on October 22, 2021. This stadium will hold five group matches, one round of 16 matches, and one quarter-final match.

Why is Qatar World Cup in the Winter?

Sheikh Mohammed bin Hamad bin Khalifa al-Thani, who is the 2022 Qatar bid chairman, has addressed this issue and said: “The event has to be organized in June or July. We will have to take the help of technology to counter the harsh weather. We have already set in motion the process. A stadium with controlled temperature is the answer to the problem. We have other plans up our sleeves as well”.

A member of the Qatar 2022 Bid official site also explains the basis for the stadiums’ carbon neutrality. He said that all five stadiums would harness the energy of the sun to provide fans and players with a cool environment by converting solar energy into electricity which will then be used for cooling fans and players. In the absence of a match, the stadium’s solar installations will export energy to the grid. Energy will be drawn from the grid by the stadiums during matches. In addition to the stadiums, we plan to make the cooling technology we have developed available to countries with hot climates so they too can host major sporting events.

This technology was once used on October 8, 2015. It was during the 2018 World Cup qualifier with China under the air conditioning.

With the world cup getting closer, there is a magnitude of soccer fans who want to travel to Qatar and support their national team. These enthusiastic fans need Qatar visas to be able to enter Qatar. Qatar offers many different types of visas for various purposes. You can get informed about Qatar visa types using the sidebar on the left.

However, some countries don’t require their citizens to have a visa to enter Qatar. For example, nationals from the following countries do not need Qatar visas and can enter Qatar for a period of 90 days within 180 days without obtaining a Qatar visa:

In addition, citizens of the following countries do not need a visa for 30 days to enter Qatar and stay so that they can enjoy their stay without concerns about a Qatar visa:

Those from the countries above are allowed to extend their stay for an additional 30 days. Additionally, applicants can enter Qatar multiple times within the predetermined period of time.

At the current moment, there are three countries whose citizens can benefit from the Qatar visa exemption list. Citizens of India can enter Qatar for 30 days without obtaining a Qatar visa. However, they must have the following documents with them:

Citizens of Pakistan are able to travel to Qatar for a period of 30 days without obtaining a Qatar visa. In addition, their 30-day stay can not be extended. However, they must have the required documents below:

Finally, nationals of Rwanda are able to travel to Qatar without obtaining a Qatar visa.

Qatar authorities announced in mid-2021 that they plan to administer the 2022 world cup as safely as possible with little to no problems. To ensure the 2022 world cup’s success and the safety of travelers, Qatari authorities declared that they would only allow people who are fully vaccinated against COVID-19 to travel to Qatar for the next year’s World Cup. Qatar’s Prime Minister Sheikh Khalid bin Khalifa bin Abdulaziz Al Thani announced in an interview to media members that while Qatar expected that most countries will have to perpetuate their vaccination process in their countries and vaccinate their populations by the end of 2022, Qatar was still determined in taking necessary measures to make sure a successful event.

All attending soccer fans must be fully vaccinated against the Coronavirus with the vaccines below:

These international travelers must present an RT-PCR test. This PCR test must be Negative. Their tests must be done within 72 hours of arrival.

World Cup 2022 CEO Nasser Al Khater stated that they expect big participation from Indian people to attend soccer matches. This expectation comes from the last word cup in Russia, where the Indians comprised the third biggest group that purchased tickets from countries that had not qualified for the 2018 FIFA World Cup. The Qatar CEO Nasser Al Khater insisted that this time things would be easier for the Indian fans. He also said that the visa for Indian attendance is extended due to Qatar’s geographical proximity to India.

Can you drink alcohol in Qatar during World Cup?

Muslim nations have zero tolerance and strict rules around alcohol consumption. Recently, it has been agreed with serving alcoholic drinks like beers at the venues during the 2022 world cup.

In Qatar, alcohol sales and consumption are tightly regulated. There are just a few bars and restaurants tied to luxury hotels that serve alcohol, and there is one state-controlled off-license store that sells liquor to permit holders.

Due to current regulations, temporary visitors, including soccer fans, will not be allowed to purchase from the bottle store.

What are National Teams Qualified?

Qatar 2022 world cup includes 32 teams. The qualifying matches for the 2022 World Cup started on June 6, 2019, with Qatar already qualified as the host.

Europe has 13 places. Currently, these teams from Europe have been qualified:

Europe has 55 national teams, and their qualifying matches began in March 2021. To compensate for the lost June 2021 World Cup qualifying dates, treble headers were held in March and September among 10 groups of 5-6 teams.

South America has 4.5 places. At the moment, the Qualified teams are:

All 10 national teams face one another home and away. These four national teams with the highest-ranking advance directly to the final. The fifth-place team will compete in an intercontinental play-off.

CONCACAF team control has 3.5 places in the world cup. It was announced that the qualification process would be revamped for the 2022 edition, scheduled to begin in September 2020 and run until September 2021. However, this was left out because of the coronavirus pandemic.

African teams control 5 places. The 28 nations with the lowest rankings played two-legged ties in September 2019. The other 26 African nations joined the 14 winners from the first round. 40 teams were divided into ten groups of four teams, with the top two teams advancing to the finals.

These matches has begun in March 2020 and run through October 2021, when football was suspended.

Four years ago, the first two rounds of qualifying were completed exactly the same way. The national teams with the lowest ranks played in June 2019. Those teams were Guam, Macau, Mongolia, Timor-Leste, Bangladesh, and Cambodia advanced. Thus, there were six teams from the first round that joined the other 34 Asian national teams, playing in eight groups of five teams as qualifiers for the Asian Cup finals in 2023.

Oceania holds power over 0.5 places. 11 FIFA-affiliated teams are split into two groups. The top two national teams of each group can progress. It has been canceled and rearranged several times, and there is no date specified. However, the most likely date is March 2022, just before the intercontinental play-offs in June 2022.

These four teams would play home and away semi-finals and finals for the right to advance to the intercontinental play-off.

These games feature one team in each of the following places:

There will be a single-leg play-off for this edition on neutral ground. These national teams race for the last two places.

The Qatar 2022 World Cup mascot and a countdown clock for the Doha waterfront are Orry the Oryx.

Qatar 2022 world cup is set to open the way for other Middle Eastern countries to become hosts in the future. However, Qatar’s performance will be under strict supervision due to concerns regarding its weather conditions and alcohol policies.

Sign up to receive the latest Qatar visa news